The announcement and hand-over of the annual Shippax Awards typically takes place in conjunction with the Shippax Ferry Conference. As we all know, COVID-19 saw this year’s conference – to have been held on board PEARL SEAWAYS between 30 September-2 October – postponed to 16-18 June 2021, where we are looking forward to hand over the awards to the winners together with the 2021 awards. The names of the winners are never communicated beforehand but as this is a special year, we decided not to keep them secret any longer and are glad that we can now present their names and citations. 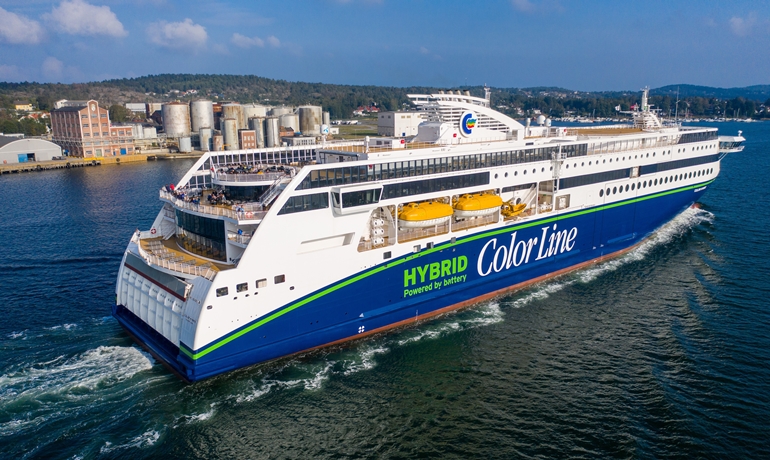 The world’s largest plug-in hybrid ferry, COLOR HYBIRD’s 4.7MWh battery pack allows for up to 60 minutes of emissions-free manoeuvring and sailing at speeds of 0-12 knots. In addition to mitigating emissions, noise is equally reduced when sailing on battery power in and out of port, particularly the port of Sandefjord which is located 3.2 nautical miles inland from the Oslofjord. The batteries are charged with environmentally friendly power from shore in Sandefjord, taking just one hour to charge them. Yet another green credential of COLOR HYBRID is the ship’s heat recovery system, collecting otherwise wasted hot water from the exhaust gas economizers and engine cooling systems in thermos-type insulated tanks used to heat crew cabins and public rooms as well as providing warm water.

The ship’s interior design represents a radical step forward in ferry travel between Norway and Sweden, the interiors boasting the best Nordic and international standards in terms of comfort, style and facilities with attention to detail. The exterior has also been very carefully designed with spacious and pleasant external decks and a harmonious overall appearance. 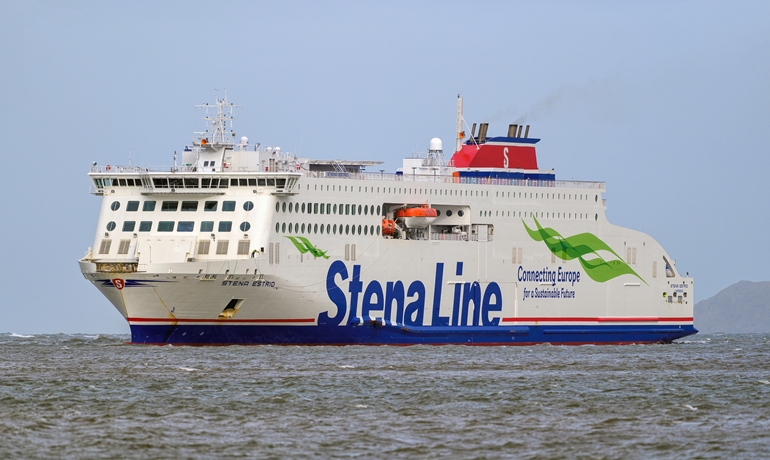 STENA ESTRID represents the first in a series of nine ultra-flexible ro-pax ferries that can uniquely be employed on a wide variety of both short- and long-distance routes inside and outside of the Stena Line network. Inspired by other flexible ferry designs which had established themselves as the ro-pax of choice for many ferry operators, the concept was developed in-house by Stena RoRo in close cooperation with Stena Line.

Rather than route-specific, tailor-made tonnage, Stena Line believes that a standard one-size-fits-all design is both commercially and operationally the most viable way forward.

A combination of a good balance between vehicle and passenger intake and the adaptability of the passenger decks for overnight or day routes make the design attractive for almost any kind of route. As befits a Stena ferry, the E-Flexer is futureproofed for lengthening, LNG propulsion, and scrubber installation.

Separating passenger vehicles from freight is yet another positive feature, with passengers having direct access to the forward accommodation without the need to climb stairs. Stena has called on long-term partner Figura to design the ship’s crisp and contemporary interior. 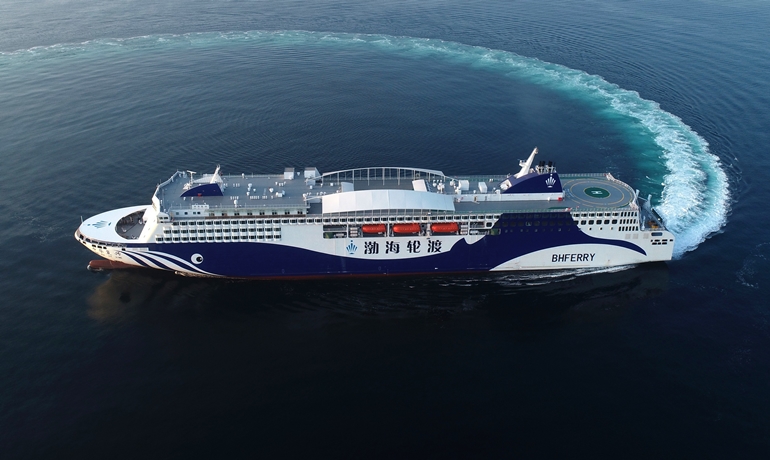 Built by the most experienced ro-pax shipbuilder in China for Bohai Ferry, the leading operator of domestic ro-pax services in China, ZHONG HUA FU XING represents another big step forward in terms of comfort and style.

The ship’s 461 cabins come in different categories, the majority of outside cabins boasting bay windows and the top-end VIP suites featuring balconies. 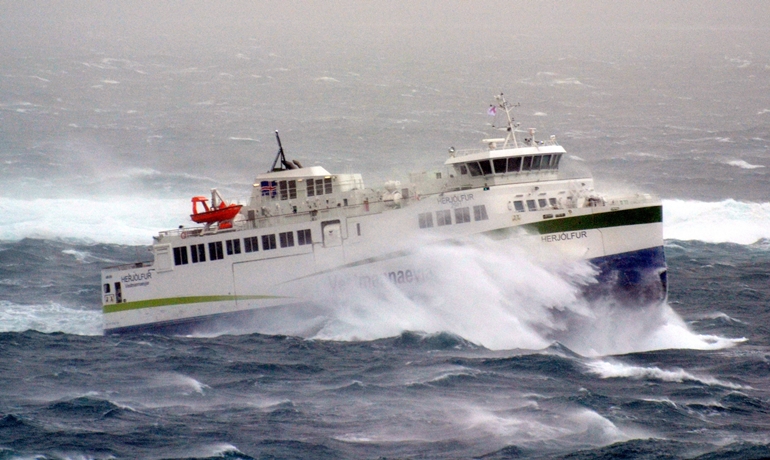 Excellent manoeuvring and seakeeping are key characteristics of the design of this full-electric ferry which operates a lifeline service in extremely challenging open-sea conditions with enormous swells and cross currents The sea area around the port of Landeyjahöfn is notorious for its combination of shallow water and heavy following seas.

Initially designed as a hybrid-electric ferry with battery power to be used for manoeuvring purposes only, it was decided mid-way through construction to upgrade to full-electric operation, making use of rapid charging systems in port which get their green electricity from Iceland’s hydroelectric and geothermal power plants.

The 3MWh battery pack is the first to be used on an open-sea ferry route rather than on a short-distance shuttle ferry operating in sheltered waters. 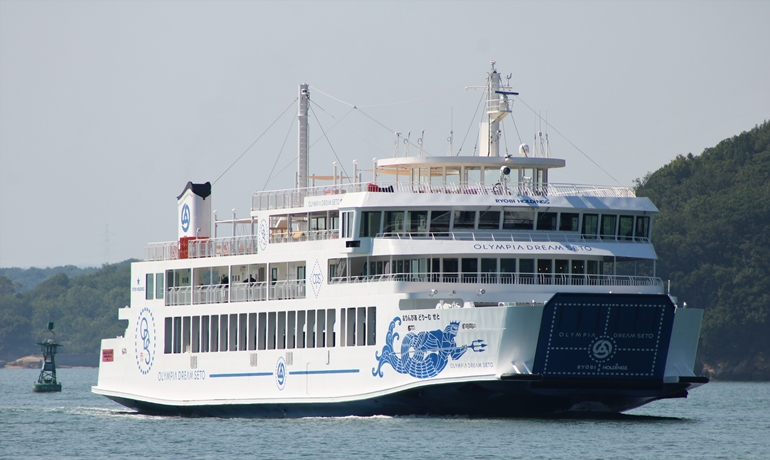 The OLYMPIA DREAM SETO brings an entirely new mini cruise concept to Japan’s Inland Sea attracting day-trippers to the island of Shodoshima by providing an innovative end-to-end product. The vessel, christened ODS for short, is themed overall around the Chuggington cartoon railway television series, and provides a high design standard internally, with a coffee shop-style catering outlet and European-style children’s play area. It is outside, however, where the vessel really excels. The entire external decks are designed as a playground for both children and adults alike, featuring cabanas, a giant deck-to-deck slide, and a remarkable miniature Chuggington railway, offering rides for younger guests. 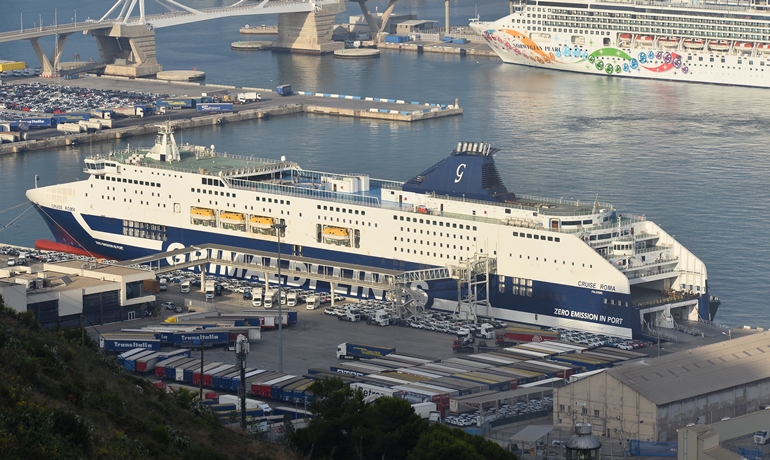 Ship lengthening has proven to be a relatively quick and cost-effective solution to increase capacity at fairly short notice whilst at the same time reducing emissions per transported unit as fuel consumption hardly increases when compared to the pre-lengthening level.

In the case of CRUISE ROMA, the freight capacity has soared by almost 22 per cent through the addition of a 28.8-metre midbody section. Grimaldi Lines has also cleverly added two battery rooms on either side of the extended lower hold, these being located within the otherwise void space within the B/5 double skin.

Charged by the PTO shaft generator, the 5.5MWh battery system – the largest so far supplied to any ship – allows CRUISE ROMA to run for up to four hours emissions-free in the ports of Civitavecchia and Barcelona, being Grimaldi Lines’ ‘zero emissions in port solution’ in locations where ships cannot be connected to the local grid to eliminate emissions from the auxiliary engines.

The time spent in drydock was also used to completely overhaul the engines, improving their efficiency, and to install exhaust gas scrubbers. 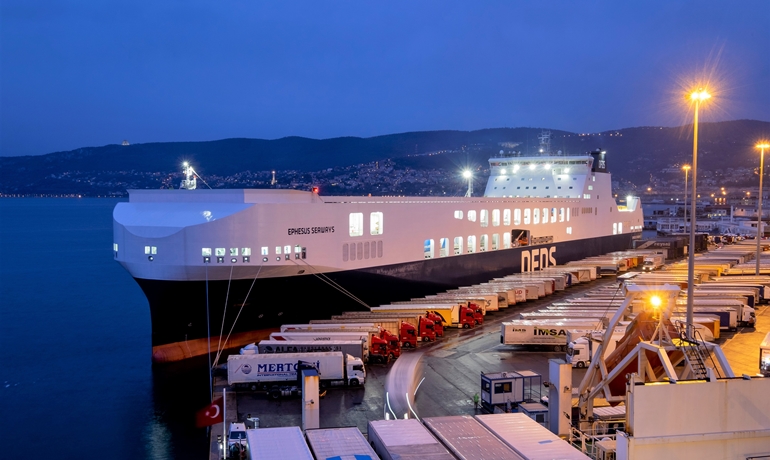 The EPHESUS SEAWAYS is the first of a class of six five-deck mega-sized ro-ro ships for short-sea services which successfully combine a very high 6,695-lanemetre capacity with good economy, low emissions and excellent cargo handling arrangements which guarantee fast handling in port. 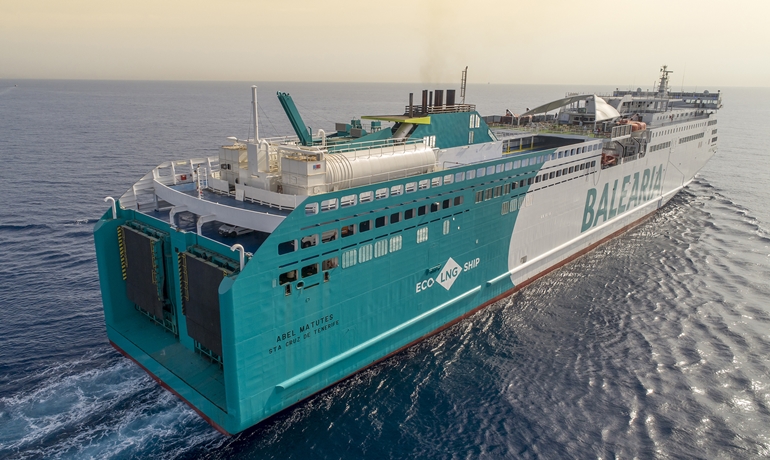 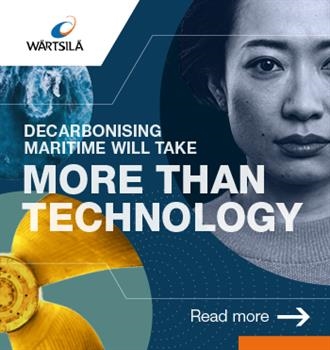