Flensburg's Mayor Simone Lange, acting as the ship sponsor, named the ship TENNOR OCEAN before the launch. Breaking a bottle of champagne on the bow, she added: "Owners, management and above all the staff are testimony to the new beginning of this historic shipyard. As mayor of Flensburg, I have always believed in the future of our shipyard and am therefore particularly pleased to be here today and to take on the honourable role of this ship's sponsor!"

The newly launched ro-ro ferry was commissioned by IVP Ship Invest. The company is part of the Tennor Group of founder Lars Windhorst, which is also the owner of the shipyard. IVP Ship Invest is in talks with various international interested parties about a possible charter or sale of the ferry.

"For me, today's launch is a sign and symbol of a strong future for FSG. It is thanks to the great shipbuilding expertise of the shipyard and the commitment of the employees that we are able to celebrate this day. Incidentally, this also puts us in a position to be able to make an important contribution to the 'turnaround' proclaimed by Chancellor Olaf Scholz with regard to equipping the navy," says Lars Windhorst.

"With the newbuilding 782, our team has once again proven that it builds technically sophisticated vessels for an economically successful deployment," emphasised Philipp Maracke, Managing Director of FSG. He also referred to the importance of Northern Germany as a maritime location and announced: "We will apply for the contract to build the research vessel POLARSTERN II. In doing so, we are open to the formation of a shipyard consortium. It is important to us to bring this highly sophisticated newbuilding to Germany and Schleswig-Holstein."

On more than 4,000 lane metres spread over four decks, the ferry TENNOR OCEAN, which is intended for freight transport, can accommodate 279 trailers. The RoRo type 4100, which was developed by FSG and has already been built several times, is characterised by a market-wide unrivalled low fuel consumption and an innovative loading concept. In the coming months, the final technical equipment will be installed. The commissioning phase for the ferry is scheduled to begin this summer, followed by the first sea trials in autumn. 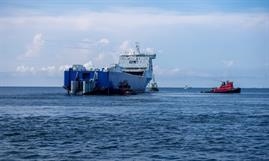 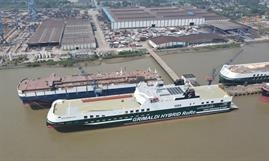 Ro-roWith the delivery of the ECO ADRIATICA, the fleet of Grimaldi Green 5th Generation (GG5G) class hybrid vessels is almost complete. This is the eleventh of twelve e... 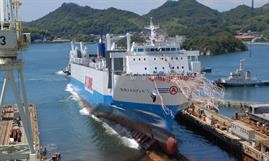 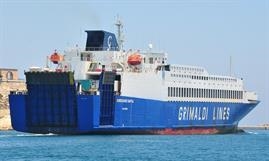 Ro-roHaving finalized the purchase of the 1995-built, 1,865 lanemetre capacity EUROCARGO NAPOLI from the Grimaldi Group in June, Ukrferry have managed to find employmen...