DFDS's direct France-Ireland service is currently operated by ro-pax tonnage with cabin accommodation for commercial drivers varying between 76 for KERRY and 115 for VISBY and DROTTEN, based on COVID-19-proof single occupancy. ARK DANIA has a 12-driver capacity and the introduction of a dedicated freighter will free up capacity on the three ro-pax ferries for more driver-accompanied freight units.

In a short telephone interview with Shippax, Aidan Coffey, Route Director for the Rosslare-Dunkerque service, said that 65% of the trailers currently using the route were accompanied, the remainder 35% being unaccompanied. However, with the introduction of ARK DANIA, DFDS is also anticipating an increase in the number of unaccompanied trailers.

DFDS confirmed that the charter of Stena RoRo's Visentini Class KERRY had been extended by nine months until the end of this year. As regards replacement tonnage for the short-term chartered VISBY and DROTTEN, Coffey told Shippax that it was too early to comment on this as "this was in the hands of the fleet department in Copenhagen".

The recent introduction of the mega ro-ro SCANDIA SEAWAYS has created an internal fleet reshuffle, allowing for a replacement of ARK DANIA on the Esbjerg-Immingham route. 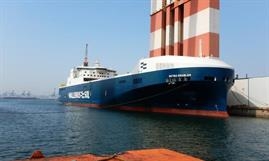 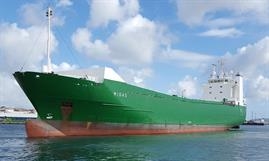 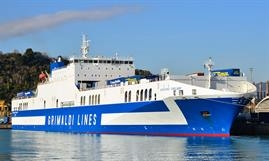 Ro-roGrimaldi introduced a third freight ro-ro on its Venice-Bari-Patras service on 4 May, the 3,810 lanemetre capacity EUROCARGO CAGLIARI, further boosting the Italian... 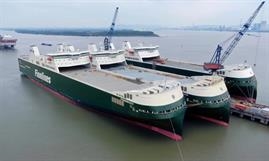 FINNECO I delivered to Finnlines

Ro-roFINNECO I, the first of three 5,800 lanemetre ro-ro vessels in the Eco class was delivered to Finnlines from China Merchants Jinling Shipyard (Jiangsu) in China on...